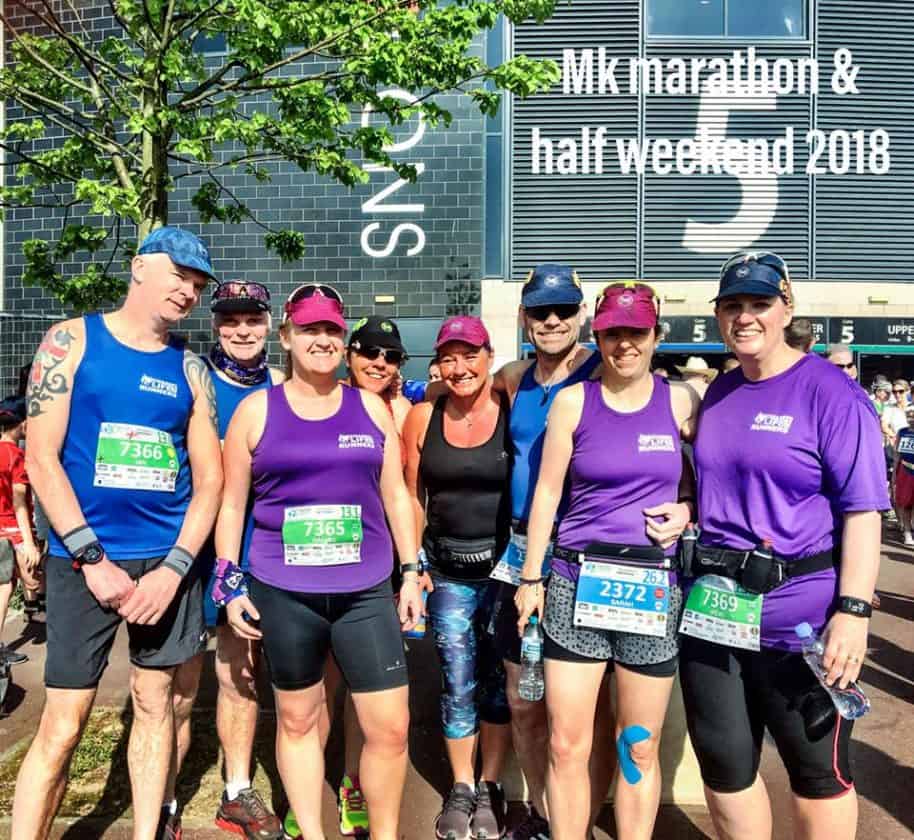 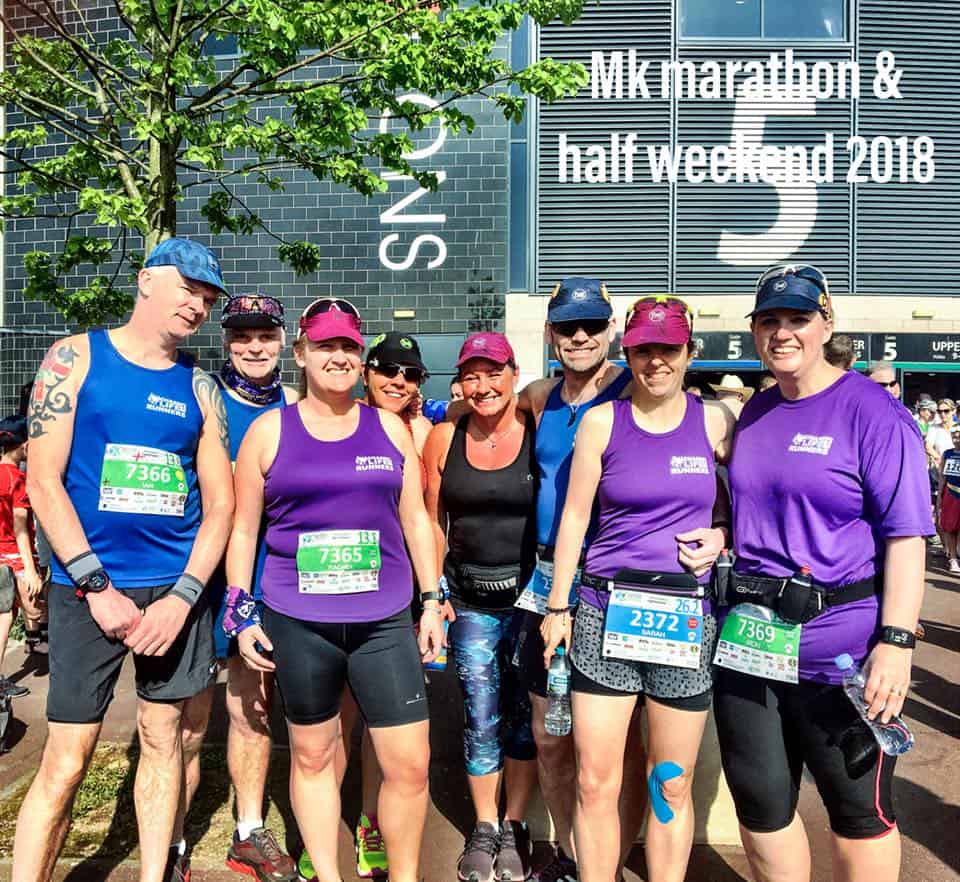 The MK Marathon in Milton Keynes was our first marathon of 2018 as we didn’t get into London this year. The London marathon was hot this year approx 24 degrees but according to reports the MK Marathon was going to be even hotter and it didn’t disappoint. The reason we chose to do this particular marathon was because the route looked beautiful, flat, had excellent bling, finishes in the MK Dons Stadium and is regarded as an amazing marathon by Runners World.

Members of the ChaseLife crazy running gang taking part in the half marathon were Les, Rachel, Ian (also 5k the day before) and Vicki; Myself, Sarah, Sharon and Tina were doing the full marathon.

Milton Keynes is not a place I have been too before so I was excited to check it out and run the marathon which was taking place on the Bank Holiday Monday which was recorded as the hottest May Bank Holiday on Record, gulp!!! What can I say about Milton Keynes, its a lovely place with lots and lots of islands and the shopping centers are just immense and not to mention the iconic cows, Cowabunga!

It was the day of the big race and as always we wore our ChaseLife Running Kit including our excellent Buff Caps and BLOC Sunglasses. It was going to be a super hot day so we also applied sun cream, yes I know it doesn’t happen very often in the UK.

The race started just outside the MK Dons Stadium which had excellent facilities for the pre-race nervous toilet visits. I don’t know the exact figure of entrants for the half and the marathon were but there must have been several thousand people at the stadium as it was super busy.

As always before a race, there is both an excited and nervous tension in the air, I personally always want to get the race started so we could just relax and do our thing. We knew this was not going to be a day for PB’s as it was so hot, it was going to be a day to simply enjoy. The start was soon upon us so we wished all our ChaseLife Crazy gang good luck and made our way to the start line.

It was a very crowded start line but we were expecting that as it was a very popular race. Before the race start, we were given a motivational speech which was pretty impressive however what was more impressive to me personally was seeing storm troopers on the start line, loved it!

There was a ticker tape explosion and we were off, the race had begun! I always run with Sarah on marathons, she has run far more than me over the years, she must be nearing 100 marathons. I must say the support from the crowds at the start was immense and continued throughout the entire race.

The first 6 or so miles of the marathon took place on wide roads giving people plenty of room. What we really liked about this first part was the support from the crowds but also the fact that we could see our runners as the course looped back in places 🙂

After this, the course moved to country lanes and paths which is our sort of thing with beautiful scenery. It was at this point where the half marathon runners split off from us at the 7 mile point. What impressed me was the continued support from crowds of people after this split which we believe was helped by the relay taking place on the same route as the marathon.

The marshalls were top notch throughout the course, providing us with support and water stations at every 3 miles which we took on board and kept a bottle till we got to the next station as it was so so hot. We were continually taking on water and tipping it down our necks, dropping our caps in the water to help keep us cool. So so many people had their hoses out for us to run through to keep us cool, kids had water guns which they fired at us and even the local fire station had a hose out to cool us down. What surprised me was how many people were walking but that was all due to the high temperature.

We never got bored on this marathon was it was varied with constant changes in direction and beautiful scenery, we even passed a castle Disney castle with a rollercoaster in front of it. It was truly a beautiful marathon, it’s just a shame it wasn’t 10 degrees cooler.

I normally have a blip in a marathon at about 16 miles which usually lasts for a mile or so and then it goes, not this time. I had a blip at 18 miles however it stayed with me until the end, I’m going to put it down to the heat, Sarah was amazing dragging me in the last miles.

Well done to everyone single one of you at the Mk marathon and Half marathon on Bank holiday Monday, The conditions were hot hot hot, to say the least and We are very proud of what you all achieved and we can’t wait to see what you can continue to achieve in the future. Thanks to everyone for making the couple of days away such fun. We hope it’s inspired you to believe and have faith in your ability.
Keep up the good work

So to wrap it up, I like Milton Keynes, the course was excellent, the marshalls and the support on the course was brilliant, but it was super hot. Would I do this marathon again? A definite YES but I would like to put in a request for it to be a bit cooler next time.